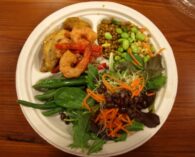 When my sister and I were kids, we felt deprived because we never had the privilege of eating a frozen dinner, aka, “TV” dinners. All the rest of the neighborhood kids got to partake of this modern convenience, and they taunted us with tantalizing tales of the ambrosia that was found in the grocer’s freezer case. We were missing out! 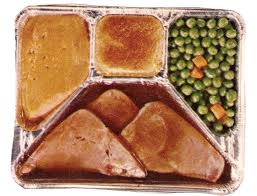 After months of harassing our mother, constantly clamoring to her at the grocery store, she finally gave in to us. We were so excited. We set up the TV trays (yes, that’s what we did in the 60s, because the dining room was in a SEPARATE room from the TV). As we eagerly plunged in, we instantly realized we’d been hoodwinked. This stuff was the worst thing that had ever entered our mouths, yes, even worse than school lunches! But we choked it down and had to pretend it was delicious because our mother warned us about the evils of prepared dinners. We’d never hear the end of it if we didn’t eat it. That was the last time we asked for a frozen dinner.

Oh, did I mention that our mother was a fantastic cook? That gets me to my point. One of the reasons people eat poorly today, is because many no longer cook. Many people don’t have a clue how to cook. Many do not know what they are eating, the nutritional value of their food, how many calories, fat, salt, or sugar they are consuming because someone else, whether that is a restaurant or a corporation, is preparing their food.

The easy solution is to go back to the traditional value of cooking your own food. In an October 20, 2014 Time Magazine article, renowned food writer, Mark Bittman, wrote an informative article about the joys and good sense of home cooking. He talked about the epidemic of obesity and other diet-related maladies facing Americans today; his intention is to guide us back to the kitchen.

The Poudre River Public Library District can also help guide you back to the kitchen. The library has over 1500 cookbooks, most are in the adult section, but many are in children’s and teen’s as well. While some of the cookbooks are for the highly skilled, most are for the average cook, and some are for the novice. I consistently have at least five cookbooks checked out at all times. For those who haven’t done more in the kitchen than push buttons on the microwave, check out books like “Saving Dinner Basics: How to Cook Even If You Don’t Know How” by Leanne Ely to get you started in cooking basics. Or try cookbooks by America’s Test Kitchen. These cookbooks are some of my favorites because they tell you the best way to make just about anything you can imagine. They tell you what works, what doesn’t, and why.

A multitude of cooking magazines can also be checked out from the library (we keep the past two years on the shelves) of titles like “Cooking Light” and “Every day with Rachael Ray.” Zinio, the library’s downloadable magazine app, offers cooking magazines like “Cooks Illustrated” and “Food Network Magazine” to name a few, for downloads to your tablet or phone.

And while you are in the library, check out “Salt, sugar, fat: how the food giants hooked us” by New York Times investigative reporter Michael Moss. Moss traces the rise of the processed food industry to many of the current health challenges Americans face today. It will make you feel a lot better about cooking your own meals rather than buying the “pre-made” versions.

I was lucky I learned the lesson early in life that it’s better to cook yourself. Not only do I cook about 95 percent of my family’s meals, but I even like cooking, and I save money. A lot of money…