Skip Navigation
My Account
Locations
What's New
Research
Download
How do I?
Posted on June 2, 2020 by Katie Auman in Book Recommendations, Library Blog 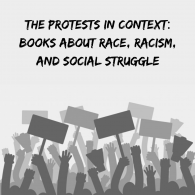 We are committed to achieving racial and social equity by contributing to a more just society in which all community members can realize their full potential.

Our Library District is working to achieve equity in the communities we serve by:

The Poudre River Public Library District is a trusted, venerable, and enduring institution, central to our community and an essential participant in the movement for racial and social equity. We will continue to work in meaningful ways to build and support an inclusive and just community.

The Protests in Context: Books about Race, Racism, and Social Struggle

It’s easy to feel powerless as you watch protests play out on television and in the media. Gaining some context about race struggles in America can give you insight and compassion to process and understand current events.

How to be an Antiracist by Ibram X. Kendi

Ibram X. Kendi’s concept of antiracism reenergizes and reshapes the conversation about racial justice in America — but even more fundamentally, points us toward liberating new ways of thinking about ourselves and each other.

Five Days: The Fiery Reckoning of an American City by Wes Moore

An account of the 2015 police-brutality killing of Freddie Gray retraces key events from the perspectives of seven insiders, including a conflicted Baltimore Police Department captain, the victim’s sister, and the owner of the Baltimore Orioles.

Just Mercy: A Story of Justice and Redemption by Bryan Stevenson

The founder of the Equal Justice Initiative in Montgomery, Alabama recounts his experiences as a lawyer working to assist those desperately in need, reflecting on his pursuit of the ideal of compassion in American justice.

We Were Eight Years in Power: An American Tragedy by Ta-Nehisi Coates

The book explores the tragic echoes of that history in our own time: the unprecedented election of a black president followed by a vicious backlash that fueled the election of the man Coates argues is America’s “first white president.” But the story of these present-day eight years is not just about presidential politics. This book also examines the new voices, ideas, and movements for justice that emerged over this period—and the effects of the persistent, haunting shadow of our nation’s old and unreconciled history.

How We Fight White Supremacy: A Field Guide to Black Resistance ed. by Akiba Solomon and Kenrya Rankin

This celebration of Black resistance, from protests to art to sermons to joy, offers a blueprint for the fight for freedom and justice — and ideas for how each of us can contribute. Many of us are facing unprecedented attacks on our democracy, our privacy, and our hard-won civil rights.

An American Summer: Love and Death in Chicago by Alex Kotlowitz

The author set out to chronicle one summer in the city, writing about individuals who have emerged from the violence and whose stories capture the capacity–and the breaking point–of the human heart and soul. The result is a spellbinding collection of deeply intimate profiles that upend what we think we know about gun violence in America.

Policing Black Bodies: How Black Lives are Surveilled and How to Work for Change by Angela J. Hattery and Earl Smith

The book discusses the school-to-prison pipeline, mass incarceration and the prison boom, the unique ways Black women and trans people are treated, wrongful convictions and the challenges of exoneration, and more.

Whether discussing why all Americans have racial habits that reinforce inequality, why black politics based on the civil-rights era have reached a dead end, or why only remaking democracy from the ground up can bring real change, Glaude crystallizes the untenable position of black America–and offers thoughts on a better way forward.

They Can’t Kill Us All: Ferguson, Baltimore, and a New Era in America’s Racial Justice Movement by Wesley Lowery

A behind-the-scenes account of the #blacklivesmatter movement shares insights into the young men and women behind it, citing the racially charged controversies that have motivated members and the economic, political, and personal histories that inform its purpose.

And Still I Rise: Black American Since MLK by Henry Louis Gates Jr. and Kevin Burke

A companion book to the PBS series examines black history from the passage of the Civil Rights Act to the election of Barack Obama and describes the contradictions in the modern African-American community.

The New Jim Crow: Mass Incarceration in the Age of Colorblindness by Michele Alexander

“Why Are All the Black Kids Sitting Together in the Cafeteria?” and Other Conversations About Race by Beverly Tatum

Walk into any racially mixed high school and you will see black youth seated together in the cafeteria. Of course, it’s not just the black kids sitting together-the white, Latino, Asian Pacific, and, in some regions, American Indian youth are clustered in their own groups, too. The same phenomenon can be observed in college dining halls, faculty lounges, and corporate cafeterias. What is going on here? Is this self-segregation a problem we should try to fix, or a coping strategy we should support? How can we get past our reluctance to talk about racial issues to even discuss it? And what about all the other questions we and our children have about race?

The Origin of Others by Toni Morrison

America’s foremost novelist reflects on the themes that preoccupy her work and increasingly dominate national and world politics: race, fear, borders, the mass movement of peoples, the desire for belonging. What is race and why does it matter? What motivates the human tendency to construct Others? Why does the presence of Others make us so afraid?

The Fire This Time: A New Generation Speaks About Race ed. by Jesmyn Ward

Jesmyn Ward takes James Baldwin’s 1963 examination of race in America, The Fire Next Time, as a jumping off point for this groundbreaking collection of essays and poems about race from the most important voices of her generation and our time.

Black Ink: Literary Legends on the Peril, Power, and Pleasure of Reading and Writing ed. by Stephanie Stokes Oliver

Spanning 250 years, a collection highlights the hard-won literary progress of black people in America, who were once forbidden by law to learn how to read, with essays from Frederick Douglass, Solomon Northup, Booker T. Washington, Maya Angelou and many more.

A collection of stories of rare force and beauty, of hardscrabble lives, passionate loves, and quirky and vexed human connection. The women in these stories live lives of privilege and of poverty, are in marriages both loving and haunted by past crimes or emotional blackmail.

American Like Me: Reflections on Life Between Cultures ed. by America Ferrera

First person accounts from prominent figures about the experience of growing up between cultures.

How to Make a Better World: For Every Kids Who Wants to Make a Difference by Keilly Swift

This fun and inspiring guide to making the world a better place and becoming a good citizen is packed with ideas and tips for kids who want to know how to make a difference. If you are a kid with big dreams and a passion for what is right, you’re a world-changer in the making.

Between the World and Me by Ta-Nehisi Coates

Told through the author’s own evolving understanding of the subject over the course of his life comes a bold and personal investigation into America’s racial history and its contemporary echoes.

Don’t Label Me: An Incredible Conversation for Divided Times by Irshad Manji

Don’t Label Me shows that America’s founding genius is diversity of thought. Which is why social justice activists won’t win by labeling those who disagree with them. At a time when minorities are fast becoming the majority, a truly new America requires a new way to tribe out.

Busted in New York and Other Essays by Darryl Pinckney

In these twenty-five essays, Darryl Pinckney has given us a view of our recent racial history that blends the social and the personal and wonders how we arrived at our current moment. Pinckney reminds us that “white supremacy isn’t back; it never went away.”

Me and White Supremacy: Combat Racism, Change the World, and Become a Good Ancestor by Layla F. Saad

When Layla Saad began an Instagram challenge called #meandwhitesupremacy, she never predicted it would become a cultural movement. She encouraged people to own up and share their racist behaviors, big and small. She was looking for truth, and she got it.

Brittney Cooper reminds us that anger is a powerful source of energy that can give us the strength to keep on fighting. Far too often, Black women’s anger has been caricatured into an ugly and destructive force that threatens the civility and social fabric of American democracy. But Cooper shows us that there is more to the story than that.