Skip Navigation
My Account
Locations
What's New
Research
Download
How do I?
Posted on June 30, 2016 by Katie Auman in Library Blog, Library Services

Americans Elias Howe and Isaac Singer are frequently credited as pioneers of the modern sewing machine. Though the very first patent for a complete sewing machine was granted in 1790 to English inventor Thomas Saint, it wasn’t until the mid-1800s – when Howe and Singer each made significant improvements in the design, capabilities, and marketing of the sewing machine – that it gained popular use in the United States.

Today, sewing remains a popular pastime and life skill, especially as artisans, homesteaders, and DIY-enthusiasts of all ages seek to create their own clothes, home décor, and more. Even kids are getting in on the fun. And they’re doing it through the public library! 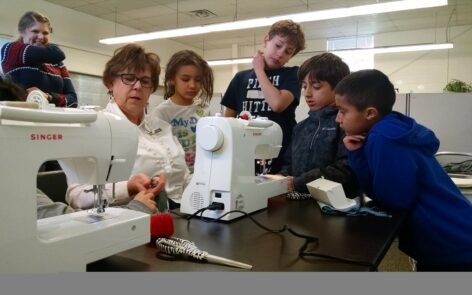 A group prepares & cuts out their patterns. (Photo courtesy of The Matthews House)

The Pajama Studio is the most recent addition to the Poudre River Public Library District’s innovative STREAM programming for kids. As part of the Library District’s Mobile Makerspace, the Pajama Studio partners with The Matthews House and their Homework Helpers after-school enrichment program to introduce kids to the sewing machine and fundamentals of sewing. The four-week long program met for about 2 ½ hours each week and covered everything from following safety precautions to cutting fabric and patterns, and from performing the stitches to creating hems and casings. 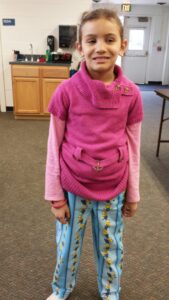 One of the finished pajama projects. (Used with permission)

“We really wanted to help the kids know what a sewing machine is and why they’d use it,” explains Kathie Young de Herrera, Library District Outreach Services. “It’s about introducing them to an unfamiliar technology and gaining hands-on experience.”

This year The Pajama Studio traveled to the two Matthews House Community Life Centers at the Fullana Learning Center and at Genesis Project, and worked with more than 25 kids – boys and girls, ranging in age, abilities, and experience. “About 95% of the kids had never even seen a sewing machine,” Kathie points out. 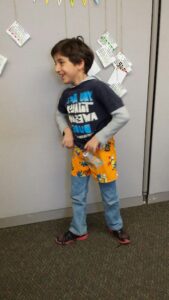 Proudly showing off his finished pajamas. (Used with permission)

The result? Each participant designed, cut, and sewed a complete project: a pair of pajamas or a backpack!

“They were astonished that they had finished their project and could actually take it home with them that evening,” says Kathie. “They had a real sense of accomplishment and pride.” In fact, Kathie later learned from one of the parents that her daughter was so proud of her backpack that she wore it to school every day.

Kathie and her team with Outreach Services truly reflect the Vision of the Library District: to be dynamic, responsive, and integral to the fabric of our community. And in this case, The Pajama Studio and The Matthews House literally used fabric to accomplish this.

Mobile Makerspace experiences, like the Pajama Studio, are held throughout the community and are designed to promote youth engagement in learning about and participating in science, technology, engineering, reading, arts, and math-related activities (STREAM education).