Skip Navigation
My Account
Locations
What's New
Research
Download
How do I?
Posted on January 21, 2021 by Katie Auman in Library Blog, News

“The three-star rating underscores the importance of the Poudre River Public Libraries to the community and reflects the hard work our staff does to meet community needs and provide exceptional service every day, said David Slivken, executive director of the Library District. “Thank you to all of our supporters who helped us achieve this rating by visiting and using the libraries often.”

LJ Index scores and Star ratings are based on data reported annually by public libraries to their state library agencies and compiled nationally by the Institute of Museum and Library Services (IMLS).

More than 5,600 library systems were reviewed by Library Journal for the 2020 Index using data released by IMLS for FY18. The ratings are based on per capita statistics for Library visits, circulation of physical and digital materials, program attendance, public computer and internet use, and Wi-Fi sessions.

Library Journal is the oldest and most respected publication covering the field of library service. The LJ Index rating system was first introduced in 2008 to recognize and promote America’s public libraries, to help improve the pool of nationally collected library statistics and to encourage library self-evaluation. For more information about the Index, visit www.libraryjournal.com 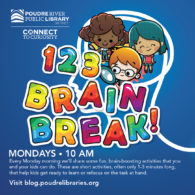 This week’s brain break will explore the senses through an outdoor sensory scavenger hunt!

Brain Breaks are short activities, often only 1-3 minutes long, that help kids get ready to learn or refocus on the task at hand. They often involve physical activity and movement though relaxing activities can also boost mental brain power.

So in addition to encouraging your kids to participate in these fun breaks, join the kiddos and have some refreshing, stress-free fun yourself, too!

Here’s what you do:

For the little ones (Grades K-3)

For the older kids (Grades 4 to middle school)

“The Why” behind the Challenge:

Check out these books for more fun!

The Ultimate Book of Scavenger Hunts by Stacy Tornio

Posted on January 14, 2021 by Audrey Glasebrook in Library Blog 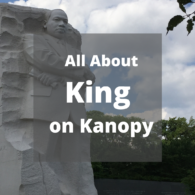 Gain inspiration and expand your historical knowledge of Dr. Martin Luther King, Jr. With your library card, you can stream dozens of films on Kanopy that explore the life and work of this extraordinary Civil Rights leader…just in time for his birthday.

Check out these suggestions for adults and some for kids, too!

King: A Filmed Record (Parts I and II) Constructed from a wealth of archival footage, this monumental documentary follows Dr. Martin Luther King, Jr. from 1955 to 1968, in his rise from regional activist to world-renowned leader of the Civil Rights movement. Rare footage of King’s speeches, protests, and arrests are interspersed with scenes of other high-profile supporters and opponents of the cause, punctuated by heartfelt testimonials by some of Hollywood’s biggest stars. King was originally presented as a one-night-only special event on March 20, 1970, at an epic length of more than three hours (plus intermission). Newly restored by the Library of Congress, in association with Richard Kaplan, and utilizing film elements provided by The Museum of Modern Art, the original version of King can again be seen in its entirety, mastered from the 35mm preservation negative.

Dr. Martin Luther King, Jr.: A Historical Perspective He was the conscience of the struggle for civil rights–and one of its many heroic martyrs. This documentary offers a one-of-a-kind examination of Dr. King’s extraordinary life. Using rare and largely unseen film footage and photographs, this film (endorsed by the King Foundation) explores how Dr. King’s ideas, beliefs and methods evolved in the face of the rapidly changing climate of the Civil Rights Movement.

I Am Not Your Negro An Oscar-nominated documentary narrated by Samuel L. Jackson that explores the continued peril America faces from institutionalized racism. In 1979, James Baldwin wrote a letter to his literary agent describing his next project, Remember This House. The book was to be a revolutionary, personal account of the lives and successive assassinations of three of his close friends–Medgar Evers, Malcolm X and Martin Luther King, Jr. At the time of Baldwin’s death in 1987, he left behind only thirty completed pages of his manuscript. Now, in his incendiary new documentary, filmmaker Raoul Peck envisions the book James Baldwin never finished. The result is a radical, up-to-the-minute examination of race in America, using Baldwin’s original words and flood of rich archival material.

March On! The Day My Brother Martin Changed the World Martin Luther King, Jr.’s sister presents a personal, stirring account of the remarkable day Dr. King delivered his “I Have a Dream” speech and of the man who went on to inspire nation.

Brain Breaks are short activities, often only 1-3 minutes long, that help kids get ready to learn or refocus on the task at hand. They often involve physical activity and movement though relaxing activities can also boost mental brain power.

So in addition to encouraging your kids to participate in these fun breaks, join the kiddos and have some refreshing, stress-free fun yourself, too!

Here’s what you do:

Recite the rhyme and suit actions to words.

Repeat and speed up the rhyme. How fast can you go before you fall over laughing?

Check out our Storytime Handouts for lots of fun rhymes, songs, and book ideas on your favorite storytime topics.

“The Why” behind the Activity:

Action rhymes are super fun and engaging to do with kids, but they’re also great for developing hand-eye coordination, listening skills, following directions, creativity, vocabulary building, and self-confidence. Add some action rhymes to your children’s daily routine and watch them grow while enjoying in each other’s company and strengthening your parent-child bond.

Check out these books for more Action Rhyme fun!

Head, Shoulders, Knees, and Toes: and Other Action Rhymes by Zita Newcome

Bountiful Earth: 25 Songs and Over 300 Activities for Young Children by Pam Schiller 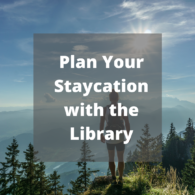 Whether you’re looking to cozy-down for your staycation and totally unwind, or feeling adventurous and hoping to explore new places, learn new talents, or have some fun with your family, the library has what you need to make the most out of your staycation.

Our collection of hiking and adventure books can spark some ideas for where to go:

Be A Tourist in Your Own Town

Maybe you want to spend a day walking around Fort Collins’ Old Town Square, window shopping and supporting local small businesses.  Did you know that the library has partnered with many local businesses to bring you discounts when you show your library card at checkout? Check out our Flash Your Card program to see participating businesses and discount offers.

With our library’s Gadgets & Things collection, you can dive into that new hobby you’ve always been meaning to try. Love birds? We have a birdwatching kit. Want to learn to crochet? You can check out a kit for that, too. Perhaps you want to up your baking game with our specialty cake pans or enjoy some night-sky watching with the telescope kit. Visit the Gadgets & Things collection to discover a new skill or hobby!

Finally have the time to head to a museum, gallery or attraction you’ve been curious about? With a library Curiosity Pass, you can enjoy free admission to a dozen venues in town or along the Front Range.

If you are sticking closer to home, make sure to check out the library’s Virtual Storytime playlist, where our talented children’s team has created over 50 interactive storytime videos for your family to enjoy. Create your own storytime with a Bundle O’ Books, 10 hand-picked children’s books from the library.