Skip Navigation
My Account
Locations
What's New
Research
Download
How do I?
Posted on July 14, 2016 by Katie Auman in Library Blog

I’ve spent much of my workday the past few days watching people of all ages stroll by the Webster House Administration Center and the Antoine Janus Cabin, or wander through Library Park searching for Pokémon and trying to capture them.  A few of the folks are so absorbed in the game they haven’t been real good about looking both ways before crossing the street. Luckily there haven’t been any problems.

If you haven’t heard of the latest craze, Pokémon Go, then you haven’t been around Old Town or any number of area parks in the past few days (or watched the news, or read the Coloradoan, or…). Those aren’t tourists descending upon your neighborhood or favorite shopping area…they’re catching and training Pokémon in a mobile augmented reality game downloaded to their smartphone.

Based on the number of Android app downloads, some experts predict the Pokémon Go app will soon have more daily users than Twitter! 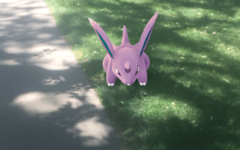 A Nidoran creeping through Library Park

So what is Pokémon Go? I downloaded the game to try to figure it out.  And, since I’ve never played Pokémon before nor have anyone in my immediate household who has, there was all sorts of learning to be done.

To make it even more interestings, there’s no instruction manual for Pokémon Go so some of it you’ll have to figure out as you play!

How Does it Work?

It follows the basic premise of Pokémon, the Nintendo videogame (first released in 1996) and anime series where “adventurers travel the world seeking ‘pocket monsters’ to train and battle with each other.”

But instead of using a video game console or playing the trading card version of the game, you’re navigating the real world as an in-game avatar looking for Pokémon critters within an anime-like version of Google Maps. 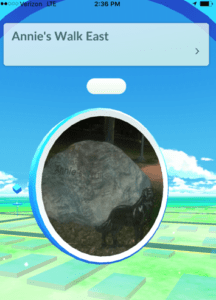 One of many PokeStop outside Old Town Library

Confused? Don’t be.  Basically, your in-game avatar follows the real you as you walk around a neighborhood or park thanks to your phone’s GPS. During your hunt, you’ll view your augmented world through your phone’s display where you’ll randomly encounter various Pokémon to capture.  Along the way actual buildings, churches, and landmarks are identified as PokeStops or Gyms.

One of the reasons for all the players outside my window is that the Webster House Administration Center is a PokeStop where people pick up free virtual items (you need to spin the picture to get them). So it’s a must-stop on your route to capture Pokémon around the Old Town Library. The more Pokémon you catch, the more points you accumulate, and when you’ve gained enough experience points to reach Level 5, you can train your captured Pokémon at a nearby Gym (which are usually found near local landmarks or popular areas).

So What’s so Fun? 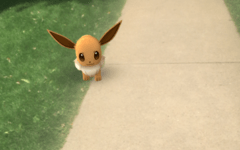 An Eevee in my neighborhood

I’ll admit at first I didn’t understand the appeal of Pokémon Go. I’m too old to have grown up playing the popular video game, and I don’t have anyone in my immediate family who plays. All I knew about Pokémon was some critter called Pikachu.

But once I started in on the game, I was hooked.  I snagged my first Pokémon outside my house and then a bunch around Library Park.

The style of augmented-reality play is super cool. The game gets you up and moving outside – and even learning a bit about the community’s buildings and landmarks. There’s a weird playful camaraderie that occurs among players; that subtle acknowledgement that “hey, I know what’s up.” Parents are getting outside with their kids. Seniors are walking through Library Park laughing and catching Pokémon. People are finding Pokémon in the stacks at the library. 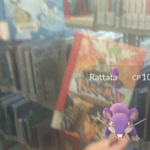 The Rattata is an elusive critter

I captured this Rattata over by the Pokémon books. It was a tough one, thus the blurry photo.

Later, I had a 15 minute long conversation with some kids at Old Town Library about Pokémon Go. They gave me tons of tips and hints, and much of the background on the series. Shhhh, I have it on good authority that Pokémon hide out around the Council Tree Library too!

So, swing by the Old Town Library, catch some Pokémon and maybe a book or two! 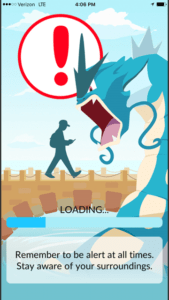 Be aware of your surroundings and stay safe

The Pokémon Go app is available on iPhone and Android. Don’t be surprised if it takes a little while to download – lots of people are trying to access it too.

And finally, pay attention to your surroundings and be a courteous player; you don’t want all the fun to stop because you stepped off a curb and twisted your ankle, and you certainly don’t want to be traipsing through private property or running into the street to catch a Pokémon.

What tips and hints do you have for new players like me?