Skip Navigation
My Account
Locations
What's New
Research
Download
How do I?
Posted on October 27, 2016 by Katie Auman in History, Library Blog 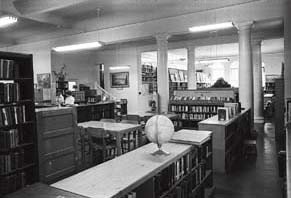 Main Library at the Carnegie Building, 1967 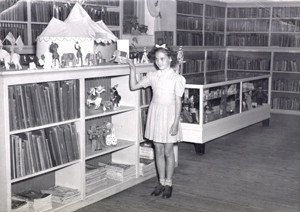 By then, a citizen advocacy group, Designing Tomorrow Today, along with the Fort Collins City Council and the voters worked in support of a capital improvement project to fund the construction of a larger and more modern library building. Initially the City Council chose to locate the new building at Washington Park on the City Hall block (within the boundaries of Maple, Laporte, Howes, and Meldrum Streets)

However, the public disliked the Council’s decision and after a public ballot vote in 1975 chose Lincoln Park (later renamed Library Park to avoid confusion with the new Lincoln Center) to be the site of the new library.

On October 18, 1976, the nearly 34,000 square foot Main Library opened at 201 Peterson St. to an enthusiastic crowd and followed it up with a Grand Opening celebration on Oct. 31. 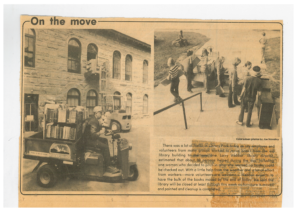 Books on the move from Carnegie to the new Main Library

Larry Webber, director of the Fort Collins Public Library from 1966-1982, points out that Main Library’s initial opening wouldn’t have happened without the hard work of community volunteers who spent an entire day transferring books from the Carnegie building, through the second story windows, onto a forklift, into CSU’s book trucks, and then across the park to the new location.

This much larger building easily accommodated more than 100,000 volumes, sat 124 patrons, and included multi-media capabilities, public meeting rooms, photocopying, and more. It was a modern building that could truly serve the city’s needs.

“Our new space was beautiful, but also a bit overwhelming for the staff,” recalls Webber. “We’d never had so much room to work with: meeting rooms, study areas, a dedicated children’s area, more shelving.” 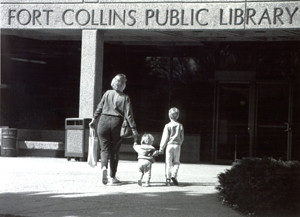 Visitors head in to Main Library, 1992

The Fort Collins Public Library’s Main Library served as a popular hub of reading, information, and community outreach for decades. With the expanded space available, the library was able to partner with other organizations and agencies to develop and produce innovative programs and cultural experiences like film series and international education (the very start of the still-popular monthly International Night series).

Each summer, residents saw the return of the popular summer reading program with themes like “So Many Pets? So Many Books!” and “Book Play” and “Wild About Reading.” 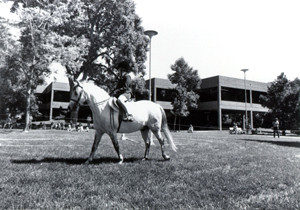 “During our very first summer reading program, we had about 1,500 kids participate,” recalls Julia Fox, a library assistant who has worked at the public library since 1980. “We printed the prizes back then on the library computer — a black-and-white coloring page — and collected each child’s reading log for safe keeping. It all seems so primitive compared to today. Imagine trying to do that now with more than 8,000 people participating in summer reading.”

Summer reading wasn’t the only beloved program at Main Library. There were annual Annie Walks to celebrate the lovable canine ambassador who greeted train passengers at the Fort Collins train depot during the 1930s and 40s. The heartwarming tale of Annie prompted library officials to adopt her as their mascot. A statue of Annie still greets visitors outside of Old Town Library on Peterson St. 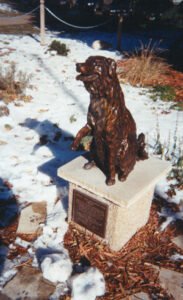 The memorial to Annie the railroad dog and Library mascot

Main Library staff also expanded the variety of educational activities available to include programs like the Library Pals volunteers, the “It’s a Girl Thing” book club, and the Bilingual Youth Program, an outreach service to the Spanish-speaking community provided by bilingual teens. Both the Library Pals and the book club continue today while the Bilingual Youth Program has morphed into a variety of excellent programs provided by the Outreach Department.

Dolores Mata has worked full-time for the public library since 1972 and has seen first-hand all the advancements and positive changes Old Town Library has undergone in the past 40+ years.

“One of the greatest things I’ve seen and been part of is as much a societal change as a library one,” she explains. “Over time I’ve seen the town and the library really focus on embracing and celebrating diversity. The library dedicated resources to multicultural services and programs like providing bilingual books and doing community outreach to Spanish-speaking families. The library should be a place where everyone is welcome equally, and I think we’ve done that.”

The beginning of the library’s libros en espanol collection can be traced back to Mata whose father let her donate his Spanish-language novellas to the library for the community to read and check out. Today, the Library District offers more than 9,600 items available in various languages. 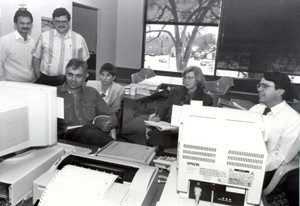 As Main Library’s programs and outreach evolved, so did its core service of providing access to materials and information. The library installed a new computer system with expanded catalog information, added materials like graphic novels, built an extensive media collection, and purchased assistive technologies like screen reading software and CCTV for library users.

“One of the library’s best advancements was when we became computerized,” remembers Mata. “Finally, we could catalog and circulate materials quickly. Before this we were using the classic card catalog and had to type book information onto a file card and had to check out books to people using an ink stamp with a due date.” 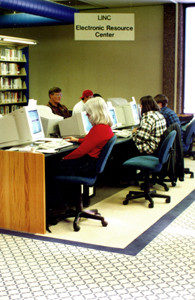 Before the library’s collection became computerized, Mata and her colleagues would use a typewriter to record the catalog information, file it in the large card catalog cabinets, stamp each item with the library’s name, create a label with an item’s Dewey decimal number, and use a hand iron to attach the label to the book’s spine. With today’s technology, Mata processes around 5,000 items per month and catalogs many of those items in both English and Spanish.

For many in town, one of the key moments in Main Library’s history was in 2006 when the community voted to create an independent Poudre River Public Library District. After many years of declining funds from the City of Fort Collins, the community chose to create the Library District using more stable funding resources like property tax revenue. Main Library, along with Harmony Library, was the beneficiary of the community’s commitment to funding a high quality public library system in Fort Collins. 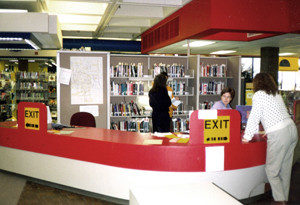 For staff at the time, the change to the Library District not only expanded the library’s services, it also created a strong family atmosphere. Julia Fox points to the sense of family as one of the biggest factors in the success of Main Library and the rest of the Library District.

“Becoming the Library District was absolutely critical for the library’s continued growth and success,” she says. “But, the support and collaboration among the extraordinary staff turned the library into the welcoming and community-centered place it is today.”

As with previous eras of growth in Fort Collins, meeting the community’s needs for additional materials, services, and space at Main Library became a challenge within the walls of the existing building, even with the addition of a third library location in 2009, Council Tree Library.

“Over the years, as the population grew, the library expanded to include our two other branches.  As the Old Town Library became ‘over-loved’ it received a much-needed facelift,” says Mary Atchison, the first president of the Board of Trustees for the Library District. “Today the same building stands, somewhat expanded, to watch the next generations of Fort Collins children grow up.” 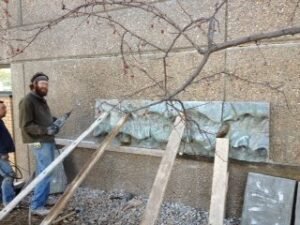 The river wall artwork being installed

In November 2011, citizens and library staff celebrated the groundbreaking for the library’s remodel which would include expanded meeting rooms and study rooms, an enhanced children’s area, and even a cyber café. The following year, Main Library was officially renamed Old Town Library and in June celebrated its grand re-opening.

“Many generations of children have run into the children’s book area and played with Clifford the Big Red Dog and other toys the library provided in an effort to make the library welcome,” recalls Atchison. “Now, those children are adults and bringing their children (or even grandchildren!) to the remodeled library to play.”

“The Old Town Library has always been a gathering place for the community and has always represented the best Fort Collins has to offer, regardless of whether it was the Carnegie library or the newer one,” says Atchison. “The library has represented community, culture, and ideas.” 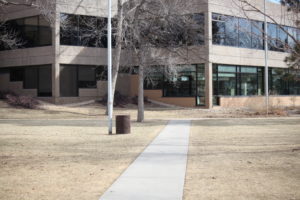 Old Town Library continues to serve as a community hub

In 2015, more than 715,000 items were circulated through Old Town Library and over 340,000 people passed through its doors to enjoy all that the library offers.

We think that the first library organizers back in the early 1900s would be astounded by what their little reading room has become and will continues to strive for in the next 40 years.