Skip Navigation
My Account
Locations
What's New
Research
Download
How do I?
Posted on January 12, 2017 by Katie Auman in Library Blog 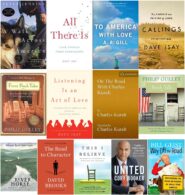 A library customer recently came into the Council Tree Library looking for book suggestions and said he was looking to read something positive about the United States or the direction the country is heading.

The man ended up checking out two recommendations from our librarian: a July 2016 issue of Time magazine with the article “240 Things that Make America Great” and the book The Road to Character by David Brooks, but his inquiry set our librarians and Reader’s Advisory team thinking about other optimistic books about America.

Here are a few titles they came up with.

A Walk Across America by Peter Jenkins

A disillusioned young man set out on a walk across America. This is the book he wrote about that journey — a classic account of the reawakening of his faith in himself and his country. A celebration of a rarely seen and almost forgotten America as he recalls the people he met and the situations he experienced during a journey in search of his country and himself.

All There Is: Love Stories from StoryCorps edited by Dave Isay

The founder of StoryCorps (a national project that records, shares, and preserves the lives of Americans from all backgrounds) presents individuals’ love stories from early dating to finding connections and lifelong commitment.

An American Childhood by Annie Dillard

A moving and vivid recollection of the Pulitzer Prize-winning author’s childhood in Pittsburgh in the 1950s conveys the keen mind and sense of adventure with which she experienced relatives, neighbors, nature, friends, and changes.

Calling: the Purpose and Passion of Work edited by Dave Isay with Maya Millett

The founder of StoryCorps relates the true stories of people who are doing what they love and making a difference, including a man from a Texas barrio who became a public defender and a waitress who makes everyone feel at home at her diner.

A special anniversary volume in the Foxfire series celebrating the art of the simple life brings together a collection of stories, customs, crafts, and wisdom from Appalachia, covering the traditional values of the region, popular local games and pastimes, personal reminiscences, descriptions of old church services, and forty years of lessons.

Discover the honesty, humor, depth, and wisdom of the front porch in this inspirational masterpiece of soulful small-town stories, which has garnered widespread acclaim for Quaker writer Philip Gulley. Reminiscent of the stories of Jan Karon and Garrison Keillor, this collection of real-life tales grew outof essays Gulley wrote for the newsletter of the Quaker church he pastored in Indiana. Graced with a gentle style and deft simplicity, these stories powerfully conjure the little truths of everyday life.

Listening is an Act of Love: a Celebration of American Life from the StoryCorps Project edited by Dave Isay

A compendium of true American life stories, drawn from an ambitious oral history project, features pieces representing every walk of life from all fifty states, in a nation-wide and thematically arranged celebration of the nation’s shared humanity. The voices here connect us to real people and their lives-to their experiences of profound joy, sadness, courage and despair, to good times and hard times, to good deeds and misdeeds.

In this collection of short audio essays, Charles Kuralt takes us from the countryside to the big cities to introduce us to the fascinating people and places that only he could find. Kuralt captures the humor and compassion of ordinary people leading extraordinary lives.

A nostalgic collection of personal anecdotes reflects a time when porch-centered lives enabled greater family and community connections, in a volume of tales that evinces such simple-world pleasures as lemonade, chirping crickets, and bonding with a pet dog.

River-Horse: the Logbook of a Boat across America by William Least Heat-Moon

Heat-Moon chronicles his journey across America’s waterways in his dory Nikawa (River Horse), encountering strange people, hostile cities, and hair-raising dangers. He and his companion, Pilotis, struggle to cover some five thousand watery miles — more than any other cross-country river traveler has ever managed.

The Road to Character by David Brooks

The New York Times columnist and best-selling author of The Social Animal evaluates America’s transition to a culture that values self-promotion over humility, explaining the importance of an engaged inner life in personal fulfillment. Responding to what he calls the culture of the Big Me, which emphasizes external success, Brooks challenges us, and himself, to rebalance the scales between our “résumé virtues”—achieving wealth, fame, and status—and our “eulogy virtues,” those that exist at the core of our being: kindness, bravery, honesty, or faithfulness, focusing on what kind of relationships we have formed.

The World According to Mister Rogers: Important Things to Remember by Fred Rogers

Rogers offers a timeless collection of wisdom on love, friendship, respect, individuality, and honesty from the man who has been a friend to generations of Americans.

Join host Ira Glass and his company as they bring a different theme to life each week, in the format of the popular Chicago radio show by the same name.

This I Believe: the Personal Philosophies of Remarkable Women and Men edited by Jay Allison and Dan Gediman

Based on the NPR series of the same name, This I Believe features eighty essays penned by the famous and the unknown—completing the thought that the book’s title begins. Each piece compels readers to rethink not only how they have arrived at their own personal beliefs but also the extent to which they share them with others.

To America with Love by A.A. Gill

A British contributing editor at Vanity Fair presents a tribute to America that traces the history and logic of the nation’s habits while sharing illuminating anecdotes reflecting the nation’s diverse culture as experienced by everyday people.

The rising U.S. Senator and former mayor of Newark, New Jersey, outlines a case for emphasizing connection and compassion to guide the nation toward a better future, sharing specific recommendations for criminal justice, economic equality and environmental responsibility. Booker sounds a stirring call to reorient our civic discourse around the principles of empathy and solidarity.

Way off the Road: Discovering the Peculiar Charms of Small-Town America by Bill Geist

Geist describes his 5,600-mile RV odyssey across America, along with the eccentric individuals, unusual places, and offbeat celebrations and events he encountered on his journey, from a ninety-three-year-old pilot paperboy to the Mike the Headless Chicken Festival in Fruita, Colorado.

What books or authors would you add to this list?