Skip Navigation
My Account
Locations
What's New
Research
Download
How do I?
Posted on November 12, 2015 by Marissa Isgreen in Library Blog, Library Services 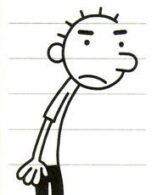 “Where would middle-grade fiction be without Jeff Kinney’s Diary of a Wimpy Kid series” says Booklist Online. And, really, where would it be? Kinney’s series manages to discuss the life and struggles of an average middle school boy using humor and illustrations. Readers were hooked. The book has been such a success that it was even made into a movie.

Despite there being nine books in the Wimpy Kid series (and a tenth one coming out this November), most kids have already finished the entire series. What can you give a child who loves this kind of fiction when they’ve read everything Jeff Kinney has written? Try this list of illustrated, comic novels from Booklist Online. These books are all available through the Poudre Libraries.

Fifth-grader Tom Gates muddles through attending school, doing homework, starting a band (DogZombies), and having an annoying older sister in this hilarious UK import that is chock-full of doodles, British slang, and silliness.

Charlie Joe has a “deep-seated love of not reading” that will resonate with many middle-schoolers. The wry and mocking first-person narrative is interspersed with anti-reading tips, small cartoons, wild parodies, and hilarious wordplay.

EllRay Jakes Is Not a Chicken
By Sally Warner. Illustrated by Jamie Harper. 2011. Gr. 2–4.

Despite trying his hardest to be good, third-grader EllRay Jakes has a knack for getting into trouble at school, and if he cannot behave, his father is going cancel their trip to Disneyland. With humor, lists, and illustrations, EllRay is ideal for younger reluctant readers.

When sixth-grade gamer Pete Watson accidentally sets in motion a plan to take over the world, his video-game skills are required to save the day. Narrated and purportedly illustrated by Pete himself, the book has a conversational feel and plenty of middle-school awkwardness.

Kate Geller’s excitement over starting fifth grade sours when her mom forces her to be nice to weird Nora, and her dreams of rising in the ranks of the junior guides and school band are thwarted. Kate’s insouciant tone, exaggerations, and silly illustrations full of jokes speak volumes.

Middle School, the Worst Years of My Life
By James Patterson and Chris Tebbetts. Illustrated by Laura Park. 2011. Gr. 3–6.

Rafe’s first day of sixth grade is horrendous, so he decides to break every rule before the end of the year. The recounting that follows reads like a middle-school manifesto for bad behavior, complete with short chapters and numerous cartoon illustrations.

This blog-style novel introduces 12-year-old Tad and everything he goes through over the course of a year spanning seventh and eighth grade. Tad’s hilarious observations and mishaps are amplified by cartoon sketches.

The Popularity Papers: Research for the Social Improvement and General Betterment of Lydia Goldblatt and Julie Graham-Chang
By Amy Ignatow. Illustrated by the author. 2010. Gr. 3–6.

Two fifth-grade best friends are determined to uncover the secrets of popularity by observing, recording, and replicating the behaviors of the cool girls. In notebook format, their research appears as handwritten entries and colorful, hilarious drawings.

Roan Novachez’s dreams of being a pilot are crushed when he is forced to attend Coruscant Jedi Academy, where he passes time drawing comics of his daily life. Tackling serious issues in a fun and funny way, this book will hold great appeal, especially for Star Wars fans.

Stick Dog and his friends are strays living in a suburban park. One day they detect “a pleasant aroma” (grilling hamburgers) and decide to satisfy their hunger at whatever cost. Succinct text, cartoon illustrations, and humor combine for a tasty tale of camaraderie.

Miles Murphy isn’t happy about moving to small Yawnee Valley, but he’s determined to be the number-one prankster at his new school. He is facing serious competition for that title, however. With over-the-top pranking and cartoon illustrations, wit and fun abound.

Timmy Failure: Mistakes Were Made
By Stephan Pastis. Illustrated by the author. 2013. Gr. 4–7.

Eleven-year-old Timmy Failure would have you believe that he is the best detective in town, along with his partner, an imaginary polar bear named Total. In reality, Timmy is bored at school by teachers who don’t understand him. Using a darker brand of humor, the struggles of Pastis’ quirky antihero will draw an older crowd.