Skip Navigation
My Account
Locations
What's New
Research
Download
How do I?
Posted on February 8, 2018 by Katie Auman in Book Recommendations, Library Blog

The acclaimed film Hidden Figures, based on the book by Margot Lee Shetterly, brought us the amazing untold story of the African American women mathematicians who helped win the space race: Dorothy Vaughan, Mary Jackson, and Katherine Jones (also, Christine Darden who is featured in the book).

But these women are certainly not the only African Americans with exceptional and untold stories and contributions.

We encourage you to spend time during Black History Month researching and reading about the many significant African American scholars, authors, politicians, activists, performers, and others who should no longer be “hidden figures.”

In addition to many books and movies available, the Library’s digital resource Biography In Context gives you access to information and articles for more than 500,000 people. You can search for individuals based on name, nationality, ethnicity, dates of birth/death, and more. The eResource covers a vast array of people from historically significant figures to present-day newsmakers. 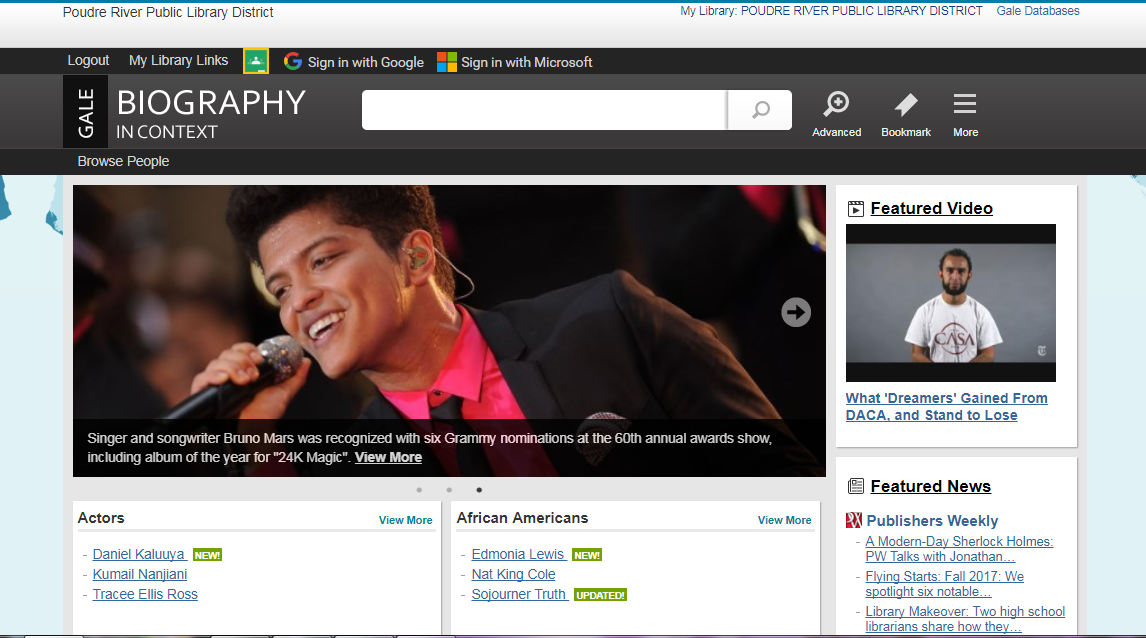 The digital resource Biography In Context is available through the Library.

Here are just a few of the “hidden figures” to get to know:

Founded a weekly newspaper called the Chicago Defender, one of the most important black newspapers in history, in 1905. Author Ethan Michaeli chronicles the importance of the newspaper in The Defender: How the Legendary Black Newspaper Changed American: From the Age of the Pullman Porter to the Age of Obama.

The first African American to complete a residency in ophthalmology and the first African American female doctor to receive a medical patent. She invented the first laser-based surgical instrument to remove cataracts from eyes.. Read more about Dr. Bath in the picture book The Doctor with an Eye for Eyes by Julia Finley Mosca or Women of Science: 50 Fearless Pioneers Who Changed the World by Rachel Ignotofsky (Teen).

The first African American child to attend an all-white public school in New Orleans in 1960. Her story is widely told in books and movies available at the Library.

The first African American woman to dance with the Metropolitan Opera Company. Kristy Dempsey’s book, A Dance Like Starlight: One Ballerina’s Dream, which tells the story of Janet Collins, is available as a picture book, DVD, and eVideo read along.

The first African American to refuse to give up her seat on a bus in segregated Montgomery, Alabama. in 1955. As a 15-year-old high school senior in Montgomery, she was arrested for refusing to give up her seat in a bus to a white man. This happened just nine months prior to Rosa Parks. Her story is told in Phillip Hoose’s book, Claudette Colvin: Twice Toward Justice and she is also profiled in Chelsea Clinton’s She Persisted: 13 American Women Who Changed the World.

The first African American woman to win on the world tennis tour, including Wimbledon, U.S. Open, and French Open titles. Two great children’s books to check out: Nothing but Trouble: The Story of Althea Gibson by Sue Stauffacher and Playing to Win by Karen Deans.

The first African American woman to write a play produced and performed on Broadway, A Raisin in the Sun.

The first African American artic explorer and it is believed that he is the first person to reach the North Pole. Read more about his exploration in Matthew Henson: The Quest for the North Pole by Kathleen Olmstead.

American cell donor Henrietta Lacks provided the cell sample that created the world’s first “immortal” cell line, called the HeLa cell line. Her cells were used without her permission and are saving lives today even though she died in 1951. Read about her in The Immortal Life of Henrietta Lacks by Rebecca Skloot.

American engineer and inventor best known for inventions that helped lubricate engines without having to shut them down. The children’s biography All Aboard!: Elijah McCoy’s Steam Engine by Monica Kulling explores his life.

The first African American woman and entertainer to win an Academy Award for her portrayal of Mammy in Gone with the Wind (1939). She grew up in Denver!

The first African American physician to perform open-heart surgery in the United States and founded a hospital with an interracial staff. The children’s book, Daniel Hale Williams: Surgeon Who Opened Hearts and Minds by Mike Venezia, tells the story of this pioneering surgeon.

Want to read more about Black History Month from our blog? Check out this post from 2014:

One comment on “Black History Month: More “Hidden Figures” to Get to Know”