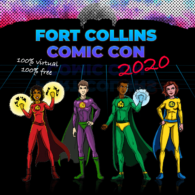 In preparation for Fort Collins Comic Con this weekend, we thought we’d share some of the winners of the 2020 Eisner Awards. The Will Eisner Comic Industry Awards are considered the “Oscars” of the comics world.

Grab one of these comics at the library (or on one of our digital platforms), and be sure to register for the virtual, free Comic Con this Saturday and Sunday, August 29 and 30. The online Con will feature voice actors Maurice LaMarche and Rob Paulsen (also known as Pinky and The Brain). Also on tap, thrilling heroics and tales of scientific daring-do by scientists, creator demos with local artists and authors, and a props showcase by local cosplayers and crafters.

A sweet and spirited tale of young love in Laura Dean Keeps Breaking Up with Me, a graphic novel that asks us to consider what happens when we ditch the toxic relationships we crave to embrace the healthy ones we need.

In a small solar system in a far-flung galaxy, two women – one a young religious acolyte and the other, a hard-bitten freighter pilot-uncover a conspiracy between the leaders of the most dominant religion and an all-consuming mega-corporation. This unlikely pair must decide where their loyalties lie-and risk plunging the world into anarchy if they reveal the truth.

Developing a chronic stomachache that she initially dismisses as a bug, young Raina discovers that her symptoms are related to her anxieties about school, food and changing friendships, in a story based on the Eisner Award-winning author’s childhood.

In a new hand-drawn syllabus detailing her creative curriculum, the author has students drawing themselves as monsters and superheroes, convincing students who think they can’t draw that they can, and, most importantly, encouraging them to understand that a daily journal can be anything so long as it is hand drawn.

You can find the full list of Eisner award winners here!