Skip Navigation
My Account
Locations
What's New
Research
Download
How do I?
Posted on February 18, 2021 by Audrey Glasebrook in History, Library Blog - No Comments 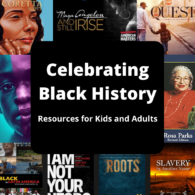 February is Black History Month, and the library has many ways to help you ponder, discover, and celebrate. Of course, there are books. Lots and lots of books. But today we’ll highlight a couple other resources available to library cardholders, with options for kids and adults. Check out these must-see films for streaming on Kanopy, as well as a mixed media experience for kids on Bookflix. We hope these e-Resources inspire you to keep exploring and learning all year long!

Must See Black History for Adults on Kanopy

This collection of films on Kanopy includes black cinema, historical documentaries, biopics, and depictions of current events in the social justice movement. Some highlights include:

Moonlight Oscar-winner for Best Picture, Moonlight is a moving and transcendent look at three defining chapters in the life of Chiron, a young man growing up in Miami. His epic journey to adulthood, as a shy outsider dealing with difficult circumstances, is guided by support, empathy and love from the most unexpected places.

Maya Angelou: And Still I Rise As a singer, dancer, activist, poet and writer, Maya Angelou inspired generations with lyrical modern African-American thought that pushed boundaries. This biopic traces Dr. Angelou’s incredible journey, shedding light on the untold aspects of her life through never-before-seen footage, rare archival photographs and videos and her own words.

Slavery and the Making of America A four-part documentary series on the history of American slavery from its beginnings in the British colonies through the years of post-Civil War Reconstruction. Narrated by Oscar-winner Morgan Freeman, the series examines the integral role slavery played in shaping the new country and challenges the long held notion that it was exclusively a Southern enterprise.

Quest This New York Times Critics’ Pick, filmed over nearly a decade, is a moving portrait of the Rainey family living in North Philadelphia. Beginning at the dawn of the Obama presidency, Christopher “Quest” Rainey, and his wife, Christine’a “Ma Quest” raise a family while nurturing a community of hip hop artists in their home music studio. It’s a safe space where all are welcome, but this creative sanctuary can’t always shield them from the strife that grips their neighborhood.

A Fresh Way to Learn Black History for Kids on Bookflix

Bookflix is a digital literacy resource that pairs an animated story with a best-selling nonfiction eBook on a similar subject. The fiction and nonfiction pairings are designed to strengthen early literacy skills while exposing young learners to real world concepts. There are several Bookflix pairings that focus on Black History – here are a few we recommend. For more, check out the People & Places collection.

Show Way and Harriet Tubman The animation of Show Way is about the quilts which once served as secret maps for freedom-seeking slaves, a tradition passed from mother to daughter in the author’s family. This is paired with the eBook Harriet Tubman, a biography by Will Mara.

Rosa and Rosa Parks Watch and read about the life of Rosa Parks, the woman whose actions led to the desegregation of buses in Montgomery, Alabama in the 1960s and who was an important figure in the early days of the civil rights movement.

The Other Side and Ruby Bridges Two girls, one white and one black, gradually get to know each other as they sit on the fence that divides their town in this animation of The Other Side. Ruby Bridges is the biography of a girl who stood up against racism and hatred to help integrate Louisiana’s school system.

Coretta Scott and Martin Luther King Jr. Day Watch this extraordinary union of poetry and monumental artwork that captures the movement for civil rights in the United States, and honors it most elegant inspiration, Coretta Scott. Then read all about the history and importance of Martin Luther King, Jr. Day.

Amazing Grace and Jackie Robinson In this animated story, a classmate tells Grace that she cannot play Peter Pan in the school play because she is black, but Grace discovers that she can do anything she sets her mind to do. The eBook Jackie Robinson tells another story of determination in the world of Major League Baseball.