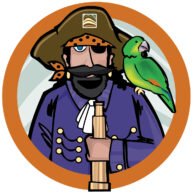 Yesterday it be cold and rainy, and I was huddled below deck in the Reading Rodger. It be a perfect day for researchin’ I thought, so I fired up me computer and navigated to the Answer Cache under the Research Tab of the Poudre River Libraries website.

There I were, starin’ blankly at the list o’ eResources ponderin’ what to learn about, when I realized I’d always wondered how the Cache La Poudre River and me self ended up sharin’ a name. I thought to me self surely, it wasn’t named after me, flattered as I’d be. I scrolled down to the Fort Collins History Connection and found the answer to me question.

Now ye may be wonderin’, “Cap’n Cache, how did the river get its name?” Well mateys, avast ye, I’ll tell the tale.

Early stories o’ the valley’s history call the river Pateros Creek or Piteux Creek. In these accounts, there be a lad who is said to have gone mad and wandered along the river’s bank until his clothes be torn to shreds. Other accounts say that the Ki-Ya-Ksa band o’ the Sioux called the river Minni Lazahan which means “Swift Current.”

But the most recounted and widely accepted story o’ how the river was named, tell o’ a group o’ ole French Trappers working for the American Fur Company. Sometime in the early 1800s, a group o’ trappers and traders, loaded down wit’ a wagon train filled wit’ booty, passed through what is now Larimer County and made camp near present day Bellvue.

Nightfall came, and a heavy snowstorm blew in. And blimey, their wagon train was stuck for o’er a week. When the Frenchman could venture on once more, the deep snow forced the men to lighten their load. The lads dug a large hole and buried the booty they could spare. To discourage the locals from pillagin’, they disguised the hole as an old campsite by burnin’ a pile o’ brush atop it.

Later that year, the trappers returned to the site to recover the stashed booty. They located the cache o’ goods and left without losing anythin’. Much o’ what they had buried had been powder (poudre) and thus the name Cache La Poudre, which means “power cache,” came to be.