In 2014, Australian and Indonesian scientists discovered cave paintings in a rural area of the Indonesian island of Sulawesi that date back more than 39,000 years. And while this amazing discovery certainly challenges ideas about the origins of human art, it also suggests a new view of the origins of human imagination and creativity. But, what does this have to do with comic books?

Well, what has evolved since those ancient cultures first recorded their stories in rock, stone, and oral tradition, is an explosion of written, visual, and audio narratives: books, plays, poems, films, documentaries, television series, comic books, graphic novels, webcasts, podcasts, and many more.

The connection among these varied forms is that each serves as a vessel to explore the human condition, to give meaning to our lives, and to ground us in our community’s history, traditions, values, and beliefs. In other words, to tell amazing stories.

Great stories, of course, come in all shapes and sizes, and few forms are more popular today than comic books and graphic novels.

For those who haven’t yet shed their alter ego and delved into comic books and graphic novels, the Poudre River Library District is a great place to begin your journey. Each of our library locations offers a variety of graphic novels appropriate for all ages to check out as well as a rotating display of comic books that users can read at the library.

The unique comic book storytelling medium blends two modes, complex in their own right, – the written story and the visual story – into a dynamic and often astounding visual language.

“There’s an interesting duality in comic book storytelling between the writer and the artist,” explains Ron Fortier, a Fort Collins resident and nationally-recognized comic book author who’s written everything from The Green Hornet series to his own Tales of the Macabre and Brother Bones, the Undead Avenger.

“Typically writers have to establish descriptive settings and moods throughout their story, but a comic book writer must be able to produce a narrative in a very lean way. It’s then the artists who – through their arrangement and artwork – interpret that story and create the scenes.” 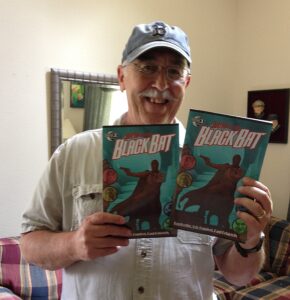 In fact, many local comic book fans point to the artwork and illustrations as the feature that got them interested in comic books and reading in the first place.

“I really learned to read with comic books,” offers Todd Jones, local comic book creator (Wicked Awesome Tales, Stakes) and publisher at Wicked Awesome Comics. “I had such a curiosity for the images in the comics that it naturally lent itself to wanting to understand the words.” 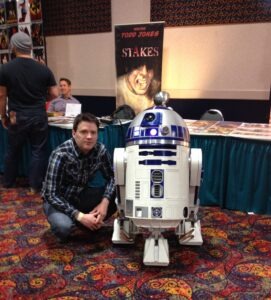 Todd Jones, creator of the comic book “Stakes,” in a recent appearance with R2D2. (Written by Jones, art by Felipe Echevarria, edits & letters by James Gaubatz)

Storytelling techniques within comic books are not unlike traditional narrative structures. There’s a beginning, middle, and end; stories are either linear or nonlinear; and they rely heavily on characters, conflicts, and plot.

“A comic book is a composition that that mirrors any other type of written story, but it’s the combination of the written text with the artwork and panel arrangement that provides the reader a more visceral experience,” says Fortier.

Liana Sanders, co-owner of Fort Collins’s Gryphon Games and Comics agrees. “The old adage is true; a picture, or in this case the comic art, is worth a thousand words. The artwork affects directly the reader’s perception of the story. Great art can really elevate a comic.”

This is not to say the writer plays sidekick to the artist. Rather, the writer provides the story arc, the critical story tensions, and the dynamic changes.

Mike Baron, an Eisner Award-winning comic book creator (Nexus) and local writer (Badger, Dogs), believes one of the most important roles of the writer is to build and release tension. “For a story to succeed, the writer must create a protagonist you identify with and care about. You want to root for them even if they’re conflicted or morally ambiguous.”

Some of Baron’s most famous work, Badger, The Battle of the Five Wizards, and the Eisner-winning Nexus, The Origin.

The creative process for comic books or graphic novels is different than short stories, novels, or other long-form writing. While prose writers may work independently for much of the process before sending their work off to an editor, comic book writers – nearly from the offset of the project – are part of a collaborative team that may consist of an editor, penciler, inker, colorist, and letterer – each adding an individual interpretation to the narrative.

Not surprisingly graphic storytelling shares much in common with film and television in terms of establishing perspectives and “shots” (long, medium, close up), but it breaks from these mediums when it comes to their visual language: choosing panels and arrangement for story pacing, placing word balloons and captions, using sound effects, and creating an energy between the words and images. 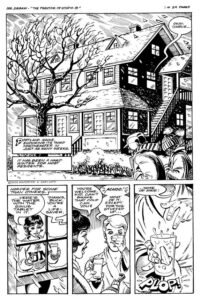 A page from Fortier’s Mr. Jigsaw comic, The Phantom of Studio B, shows the varying perspectives an artist can capture.

This energetic interplay among the dialogue, descriptive text, images, and arrangement can convey complex human emotions, rising tensions, and conflicts in a minimal amount of space, something that is more difficult in typical prose writing.

“Readers see a picture of a character alongside just a few words and easily understand what is happening,” explains Jones. “The writer doesn’t have to write large amounts of text describing what a character is feeling or experiencing; the artist expresses that and the reader interprets it. The same goes with creating the setting or mood.” 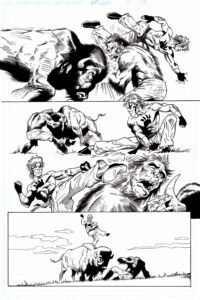 A page from Badger written by Mike Baron, with interior art by Val Mayerik, demonstrates how the art conveys the story with little to no text.

James Gaubatz, a local comic book artist and exceptional letterer who’s worked on titles like Bakuman and Wicked Awesome Tales, easily sums up the goal of comic book creators: storytelling! He explains the reason he chooses to work with comic books and graphic novels – whether it’s a purely fictional creation or a true story – is to tell the story. It’s an occasion for pure creativity and true passion.

And comics are a storytelling vessel not confined by genre. Today, readers are just as likely to find amazing fantasy and sci-fi stories in comic forms as horror, romance, or biography.

“It has been said that next to hunger and thirst, our most basic human need is for storytelling.” – Khalil Gibran

Jones is the creator of the comic anthology series, “Wicked Awesome Tales,” featuring a variety of comic writer and characters.

Local and independent comic book creators like Ron Fortier, Todd Jones, and Mike Baron offer their work at local comic shops such as Gryphon Games & Comics and Halley’s Comics in Fort Collins and in-person at comic conventions like the upcoming Fort Collins Comic Con, August 27-28, at Northside Aztlan Community Center. For more information on the Con and how to purchase entry badges visit FoCoComicCon.com.

Want to know more about comic books and graphic novels? Bookmark the River’s Mouth blog page for future posts on the topic or swing by the library to check them out for yourself!