Skip Navigation
My Account
Locations
What's New
Research
Download
How do I?
Posted on April 23, 2020 by Katie Auman in Book Recommendations, Library Blog

Excerpt shared with permission from the author, Mahnaz Dar. The article first appeared online at School Library Journal. Looking for ways to keep your comics-loving kids and teens occupied? These free webcomics promise to eat up hours of time. Middle Grade Audrey’s Magic NineWritten by Michelle Wright and illustrated by Courtney Huddleston, Francesco Gerbino, and […] 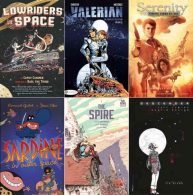 Looking to expand your Universe of Stories this month? Why not try one of these space-themed graphic novels or comic book omnibuses? Not only do these books have amazing stories and characters, but they fit right into the summer reading theme. Don’t forget to sign up for the Summer Reading Challenge: A Universe of Stories […]

The Will Eisner Comic Industry Awards, frequently described as the Oscars of the comic book world, are handed out annually at San Diego Comic Con as part of prestigious ceremony honoring the previous year’s best of the best in comics and graphic novels. The Eisner Awards – named for the industry innovator, cartoonist, and creator […]

In 2014, Australian and Indonesian scientists discovered cave paintings in a rural area of the Indonesian island of Sulawesi that date back more than 39,000 years. And while this amazing discovery certainly challenges ideas about the origins of human art, it also suggests a new view of the origins of human imagination and creativity. But, […]

With a circulation of more than 3 million items and upwards of 1 million visitors at the three library locations each year, it’s the Poudre River Public Library District professionals who keep it all together and running smoothly for the community! But these women and men do so much more than just serve as book […]