Skip Navigation
My Account
Locations
What's New
Research
Download
How do I?
Posted on August 11, 2016 by Katie Auman in Library Blog, Library Services

With a circulation of more than 3 million items and upwards of 1 million visitors at the three library locations each year, it’s the Poudre River Public Library District professionals who keep it all together and running smoothly for the community!

Here are just two of the great librarians you’ll find around. Stop by and say hello! 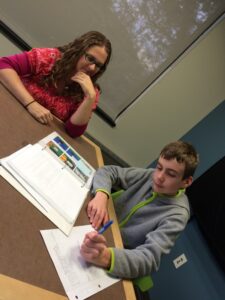 Nicole & Cameron work on his comic book, The Galaxy of Randomness.

Meet Nicole, the Teen Services Librarian located at Old Town Library. In addition to creating a welcoming place for local teens to hang out and read, you’ll also find Nicole improving the new comic book racks and working with fellow Teen Librarians on programming and events like Heroes vs. Villains and the ongoing Anime Club.

What you may not know about Nicole is that she’s had a positive impact on many Poudre School District students and their various research projects. Recently, she worked with Cameron, a student at Preston Middle School, on his 20 Time project for his English class which required him to identify, research, and develop a project, presentation, and blog! Cameron chose to research how to create a comic book and then write and illustrate his own.

By connecting with Nicole, Cameron was able to find a variety of books and other resources for his project. Nicole’s own deep knowledge of comics and graphic novels certainly helped too. She was able to recommend comic book examples for Cameron to read, artists and authors similar in style to Cameron’s vision, and ultimately help him refine and focus his project.

“It’s rewarding to work with students like Cameron who are so invested in their school projects,” says Nicole. “They own their project; I just assist where I can and serve as a resource for them beyond books.” 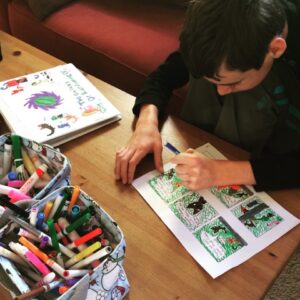 Cameron illustrates his story before uploading it to his blog.

Anyone who has studied comic books and graphic novels knows there’s much, much more to them than superheroes and Bam! Pow! Blam! In collaborating with Nicole, Cameron found a valuable and enthusiastic resource to aid his comic’s development.

Check out Cameron’s final comic book, The Galaxy of Randomness, online. He also created a second comic – the story’s prequel, Where Nutcorp Came From – which you can also view on his site. 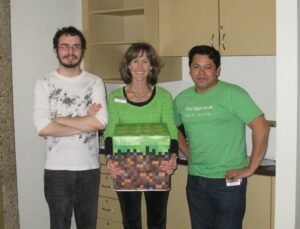 Librarian Amy Holzworth has her hand in many different programs and services at Old Town Library. From storytimes to Kevin Cook’s Colorado, she’s involved in many of the educational activities around the Library District.

One of her recent STREAM (Science, Technology, Reading, Engineering, Art & Math) endeavors has paid off big time for the teens it serves as well as the library!

Several times each month Amy coordinates an enthusiastic group of teens, ages 14 and up, who volunteer their time and expertise to lead and develop Minecraft sessions for younger children. The teens serve as leaders, organizers, and mentors to all the other players, ranging in ages and skill levels, as well as assisting parents and caregivers in understanding the game. About 30 teen volunteers have assisted in the development of the program, and about 12 are actively helping out during scheduled Minecraft sessions throughout the year.

“Our teen volunteers are a critical part of our Minecraft program,” explains Amy. “They not only know the technology and the game, but they establish great relationships with the younger players and mentor them in digital safety and how to play the game and interact with other players.”

If you’re not familiar with Minecraft, here’s the lowdown: it’s often described as a “sandbox game,” a virtual land where users/players can create their own worlds and experiences using building blocks, resources they discover, and their own imagination. Think virtual Lego. Without any real set of instructions, play is left up to the players’ creativity, flexibility, and set of rules,

The Library District hosts three or more Minecraft sessions each month, each designed for different age groups. The teen volunteers lead each session to set up the technology, teach new players how to get started, establish group play rules, help maintain fair play, and be a friendly face to bounce ideas off. They also lead outside games and help with crafts during 15 minute game breaks.

“It’s a great collaborative creation between the teen volunteers and players,” Amy mentions. “Plus, the library is reaching a population of young people who might not otherwise have come to the library or known that we’re more than just books.”

Minecraft sessions are available for all ages & player levels.

Like with many of the Library District’s other teen volunteer programs, such as the Interesting Reader’s Society teen advisory group, the Minecraft volunteers play a large role in the direction of the library and offer suggestions for teen programming, books, and more.

If you’d like to become a teen volunteer, fill out the online Volunteer Application and Serena Robb, the Library’s Volunteer Director will get back to you soon. Not interested in Minecraft, but still want to volunteer? We have many opportunities for you to get involved. Contact us today!